No cricket with India until it frees held Kashmir: Firdous Ashiq Awan 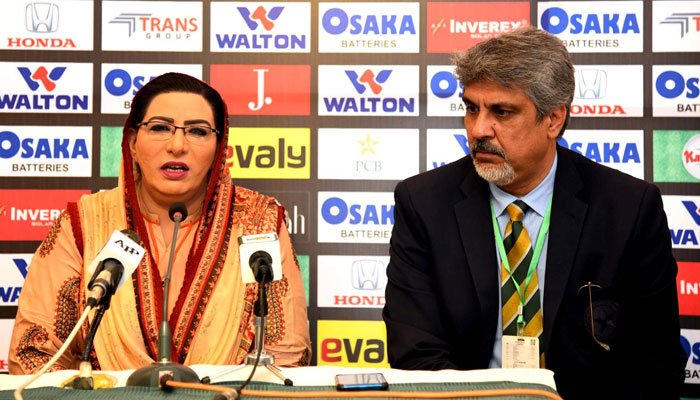 No cricket with India until it frees held Kashmir: Firdous Ashiq Awan700×400

Any bilateral cricket match between Pakistan and India cannot be played until India “frees the people of occupied Kashmir,” said Special Assistant to Prime Minister on Information and Broadcasting Dr Firdous Ashiq Awan here on Saturday.

She was talking to the media on the second day of the first Test match between Pakistan and Bangladesh, being played here at the Rawalpindi Stadium. “India has created many barriers in our path and promoted false propaganda on all forums to stop international cricket in Pakistan,” Firdous Awan said. “Until India frees the people of occupied Kashmir, any matches between the countries will rub salt into the wounds of Kashmiris.”

The special assistant commended Bangladesh authorities for sending their team to Pakistan despite their initial reservations. “They honoured their commitment, and by sending their team, have supported us in reviving international cricket in the country. Together we have demonstrated to the world that we are a peaceful country,” she said. She said, “I am also a cricketer myself,” adding that had she not been a politician, she would have been the coach of the national women’s cricket team.

The special assistant to the PM said Pakistan’s positive and peaceful image stood promoted as a result of the efforts and vision of Prime Minister Imran Khan. She said that Pakistan was a peaceful country and restoration of international cricket was its manifestation. She said sports were playing a big role in creating healthy minds, adding that sports activities promoted healthy societies. The government also wanted to restore other sports in the country and reforms were being brought into other sports including football, Kabadi etc, she remarked.

She said that reforms were introduced in Pakistan Sports Board to improve its performance. She said that Prime Minister Imran Khan had restructured country’s cricket which has started paying dividends. Awan said that natural talent would come up with these initiatives. She said that long-term planning was done and priorities were set to bring stability in the country. She said that improvement would come step by step.

Dr Firdous said Sialkot produced sports goods including cricket bats and it was the desire of the people that international cricket matches should also be held in that city again. She said the government was committed to exploiting the potential and talent of their youth in different sports.

Dr Firdous said a resolution drawing the world attention towards blatant human rights violations in Indian Occupied Jammu and Kashmir (IOJ&K) had been delivered to the office of the United Nations Secretary General (UNSG).

The resolution was submitted to the UN Resident Coordinator in Pakistan, Julien Harneis on the Kashmir Solidarity Day by the people of Pakistan, she said in a statement. “The UN Coordinator Julien Harneis has confirmed through an email that it was received by the UN Secretary General Office,” she said. She said the government has fulfilled another commitment made to the nation and the Kashmiri people about raising their voice at all international fora.

Meanwhile, Dr Firdous Ashiq Awan said the government had introduced a strong regulatory mechanism for the real state sector to purge the small investors from the mafia’s fraud and deception under a proper legal cover.

“The reforms, introduced by the government in this sector on the instruction of Prime Minister Imran Khan, reflect that the government is guardian of each penny of those investors which belongs to salary of the poor classes and who make investments to get their own shelters in housing projects,” she told media person here at Pakistan-China Friendship Centre, where she inaugurated a property expo.

“Now, nobody can hoodwink the authorities and whisk away by luring innocent people in their trap as the government is closely monitoring the mechanism of every project in the real estate sector from its launch to completion,” she added. She said some developers at the expo had requested her to introduce reforms in the sector so that it could attract more investments.