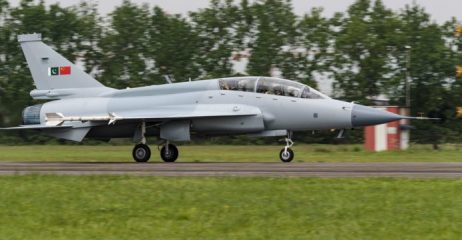 The Pakistan Air Force (PAF) is expected to receive the first 12 Pakistan Aeronautical Complex/Chengdu Aircraft Industry Corporation (PAC/CAC) JF-17B Thunder “in the near future,” according to PAF officials cited in a February 4 IHS Jane’s report.

Khan at the time congratulated PAC Kamra and CAC for the “successful accomplishment of [the] 2019 production target and on completing [the] first 8 dual-seat JF-17 aircraft in [a] record time of five months.”

The JF-17B aircraft will be available in an attack and trainer variant. According to an IHS Jane’s interview with Khan from January 2020, the JF-17B will help streamline pilot training processes within the PAF.

“The JF-17 pilots are currently being posted to Lockheed Martin F-16, Chengdu F-7PG or Dassault Mirage IIIEA ROSE aircraft before converting to the JF-17,” Khan was quoted as saying by IHS Jane’s. “But they will start going straight to a JF-17 OCU [operational conversion unit] after completing their advanced jet training.”

This “will ensure that pilots transitioning to the Sino-Pakistani jet are a lot younger than they are now,” according to Khan.

In addition to the eight aircraft rolled out in late December, the PAF expects to receive a further 14 JF-Bs in 2020 and four more in 2021. The first prototype of the JF-17B twin-seater was reportedly completed in late 2016 and conducted its maiden flight in April 2017.

In comparison to previous JF-17 variants, the JF-17B is a twin-seat aircraft and features a deeper dorsal spine and added fuel capacity.

The latest single-seat variant of the aircraft, theJF-17 Block III, conducted its maiden flight in December 2019.

Notably, this new variant may be fitted with the Chinese WS-13 engine instead of the Russian Klimov RD-93MA found on JF-17 Block I and Block II aircraft. The latest variant of the aircraft will also feature additional technical upgrades, as I explained elsewhere:

According to PAF sources, the service has opted for the the Nanjing Research Institute of Electronics Technology’s KLJ-7A AESA radar system.